Difference between revisions of "Joining the EU (Indy)"

The criteria for joining the EU, the "Copenhagen Criteria", were set by the European Council (the body that defines the European Union's overall political direction) in 1993:

No commentator seriously contends that Scotland, a wealthy country with a liberal democracy, a commitment to the rule of law and to human rights, and a market economy, would not meet these criteria.

"I don't intend to force countries to join the euro if they are not willing or not able to do so." - Jean Claude-Juncker, President of the European Commission[2].

Further, there is no mechanism for enforcing adoption of the euro; on the contrary, there are restrictions. Before it is allowed to join the euro, a member state must have spent two years in the European Exchange Rate Mechanism (EMR), but there is no time by which this must be done. The thrust of EU policy on this issue is that it is up to the member state to align its economy with that of the eurozone, and the EU's role is to monitor this alignment rather than to enforce it[3].

Of all 28 EU member-states, nine (i.e. about one-third) have not joined the euro; 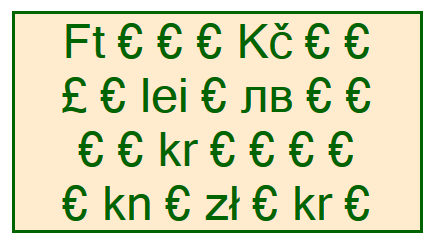 and of the 16 countries that have joined the EU since the Copenhagen Criteria were established, seven (Sweden, Poland, Czech Republic, Hungary, Bulgaria, Romania and Croatia) - i.e. about half - have not joined the euro. Joining the euro is voluntary, and Scotland will make its own choice.

The European Fiscal Compact[4] is a set of numerical fiscal rules and calculations that limit a member state’s government deficit to 3 per cent of GDP, and it imposes a "corrective procedure" if the deficit rises above this. As of 2018/2019, the prospective deficit of an independent Scotland (calculated under current constitutional circumstances) is 7 per cent of GDP[5].

However, the Fiscal Compact does not apply to the UK, while other non-euro member states can choose to opt in or not. Denmark, Bulgaria and Romania have opted in, while Hungary, Poland and Sweden have not[6].

There is no queue for EU membership. At any one time, talks will be taking place with a number of countries hoping to join, but there is no sequencing of applications, and the progress that each country makes depends on the circumstances of its case. In the words of the European Parliament,

Finland, Sweden and Austria all negotiated their accessions within two years. Dr Kirsty Hughes, Director of the Scottish Centre on European Relations, believes that Scottish accession could be negotiated within three[8].

The argument against Scotland being able to join the EU has largely relied on press rumour, falsehoods, and an overly simplistic reading of the EU’s rules; opponents do not allow for the EU's nuanced and pragmatic approach to problems. The stated criteria for membership and the EU's history of enlargement leave no doubt that Scotland's application will succeed.