Scotland is not a poor country. Its natural resources are a significant proportion of those of the UK, and its people have well-established skills in creating businesses and institutions. It is also at peace with all its neighbours.

In terms of natural resources, Scotland produces nine-tenths of the UK's hydroelectric energy, and nearly half of its wind, wave and solar energy; it contains four-fifths of the UK's untapped coal reserves, and virtually all its oil. It houses between ten and twenty percent of the UK's farm animals - beef cattle, dairy cattle, sheep and pigs - and produces four-tenths of its timber and 15% of its cereals. Its population, by contrast, is only 5.4 million - one-twelfth of the UK total.

In terms of the results of human enterprise, Scotland has a £17bn construction industry, a £17bn financial and business services industry, a £9.3bn tourism industry, a £5bn aerospace industry, a £9.3bn chemical industry, and a £3 billion life sciences industry.[Source?] It has trusted institutions, a history of intellectual enquiry and invention dating back to before the eighteenth century, and the most highly educated workforce in Europe[1]. And it has no disputes with any of its neighbours. 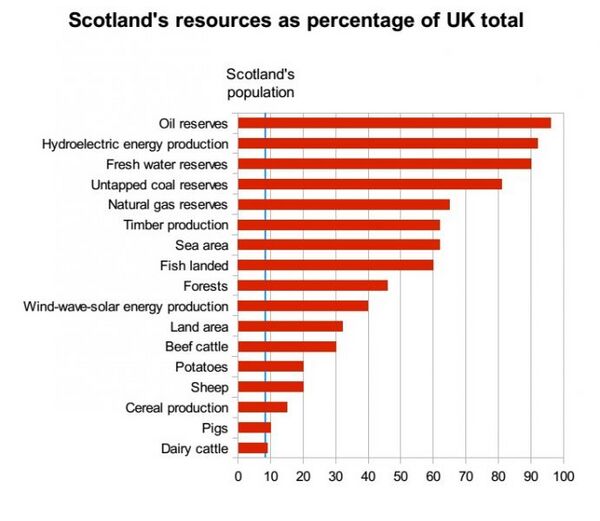 Despite this wealth of resources and institutions, the Scottish Government currently spends on services £13bn per year more than it receives ('the deficit'). An explanation sometimes given for this is that Scotland's population is spread over a large and otherwise empty area, creating additional costs; however, the data do not support this view.

The two measurements that show how dispersed a population is are its urbanisation index, denoting the percentage of the population that live in cities, and its population density, which denotes the number of people per square kilometre. Scotland's urbanisation index is 71%[2], not far short of the UK's 83%[3], but its population density is only 69[4], one-quarter of the UK's 274[5]. Over the last eight years, however, Scotland's urbanisation index and population density have barely changed, but its wealth-per-person (GDP-PPP) has risen by more than 20%, and the deficit has fallen on occasion to only 60% of its 2009 value[6]. (It is true that urbanisation has a moderate-to-strong effect on prosperity, but it does not affect the year-on-year performance of the economy; rather, it creates the conditions under which an economy can thrive.) If a dispersed population had made economic growth unachievable, the changes that these data show could not have taken place. 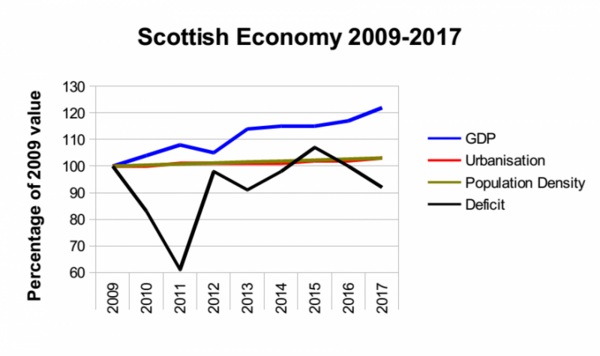 Further, population density has only a tiny effect on wealth-per-person. The chart below shows GDP for 184 countries ranked left-to-right by population density[7][8]: there is hardly any correlation (R-squared = 0.17). 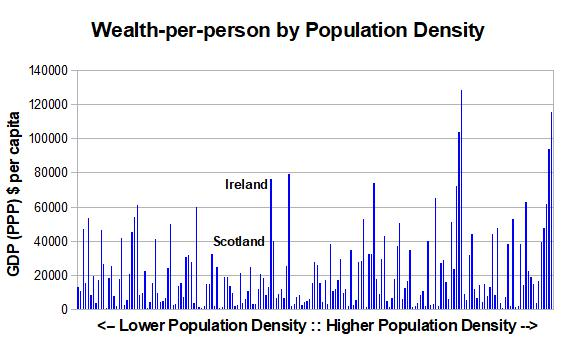 There are notable high performers at the extreme left of the chart (Australia, Iceland, Canada) with population densities of 3 to 4 persons per square kilometre and per-capita GDP of around $50,000, and low performers at the right-hand end of the chart. Scotland and Ireland fall next to each other on the chart with the same population density; Ireland's wealth-per-person, at about $80,000, is double that of Scotland, and it is less urbanised than Scotland, at 63%.

Commentators who claim that Scotland's spread out population cannot sustain a prosperous economy do not normally examine the data, but assume that it is so because it stands to reason that it must be.

'Too wee': economic and military defence

'Too stupid': quality of the workforce

How to deal with Scotland's higher deficit, compared with the UK.